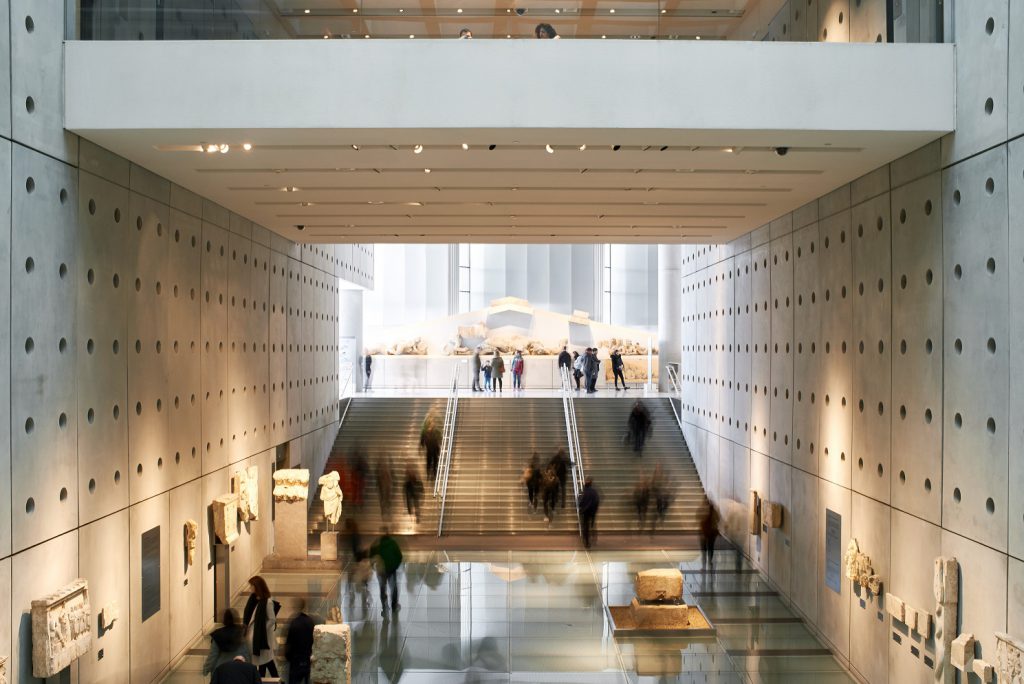 The Acropolis Museum opened its doors in June 2009. Since then, it has become the most well-known and most visited museum in Greece and one of the most important museums and cultural institutions worldwide.
The Acropolis Museum is among the top museums in the world, ranking 6th in the list of the Travelers’ Choice Awards for Museums for 2018 by TripAdvisor.
Designed by Bernard Tschumi, in collaboration with the Greek architect Michael Photiadis, it is devoted to the Parthenon and its surrounding temples. It is focused on the findings of the archaeological site of the Acropolis of Athens and lies over the ruins of a part of Roman and early Byzantine Athens.

In the “Gallery of the Slopes of the Acropolis” on the museum’s ground floor, visitors may take a look at things that Athenians used in their everyday life, as well as findings of the slopes of the Acropolis. The impressive nine-meter high, naturally lit first floor hosts the “Archaic Gallery” with magnificent sculptures that graced the first Acropolis temples. On this floor the five Caryatids, the maiden columns that held up the Erechtheion, are also to be seen, with the sixth being in the British Museum. The glass-encased “Parthenon Gallery” on the third floor hosts the temple’s 160m-long frieze, as it once was, following the building’s layout and giving the visitor the possibility to stroll along.

To celebrate the 10 years since the museum’s first opening, this summer an excavation site is set to open, enhancing the museum experience and offering insight into life in antiquity. The excavation site is located below the museum and will be highlighted through special lighting effects, informative signage and digital applications. It will also be accessible to people with disability via ramps.

Apart from the exhibitions, many events are also taking place inside museum’s restaurant, which offers a breathtaking view to the Acropolis. Every Friday evening live jazz performances are taking place, while every Thursday afternoon you may listen to live harp melodies.