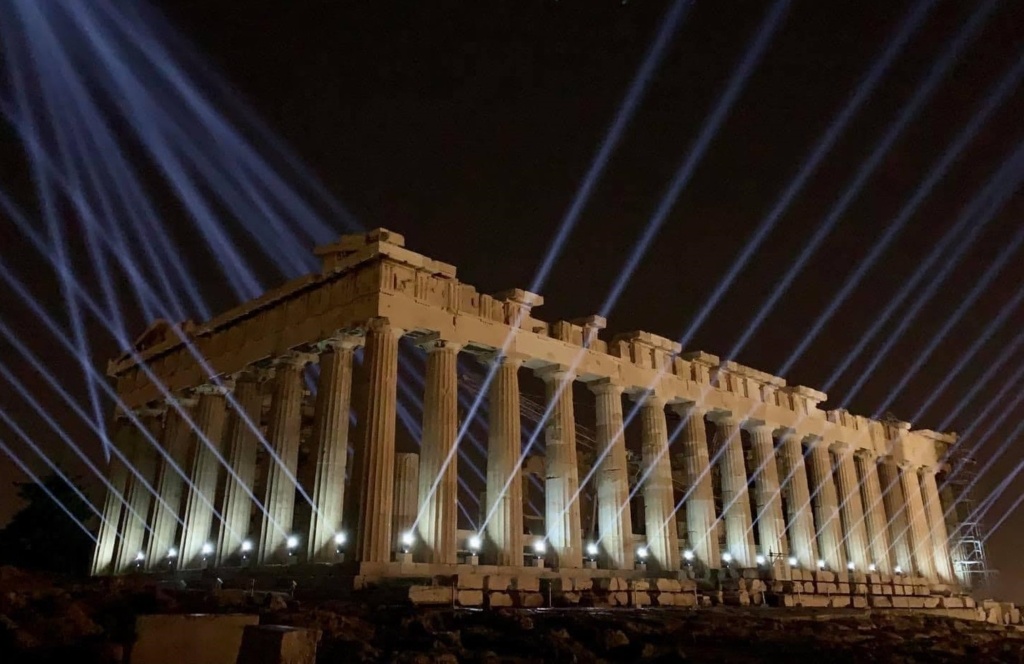 The new lighting of the Acropolis was unveiled on Wednesday 30 September in the presence of the President of the Hellenic Republic, Katerina Sakellaropoulou, Prime Minister Kyriakos Mitsotakis, Culture Minister Lina Mendoni and the president of the Onassis Foundation, Antonis Papadimitriou.

According to the Ministry of Culture, this is the first of a series of projects carried out by the ministry aimed at the overall upgrade of the infrastructure and services provided by the Acropolis, with funding and implementation from the Onassis Foundation.

For the first time, the lighting distinguishes the different monuments at the Acropolis. Specifically, nine points are illuminated again: the Rock, the Walls, the Parthenon, the Propylaea, the Temple of Athena Nike, the Erechtheion, the Theater of Dionysus, the Stoa of Eumenes and the Dionysian Sanctuary.

The lighting includes five more monuments, which are illuminated for the first time: The monument of Thrasyllos, the Sponsors’ Columns, the Asclepieion and the caves of Apollo and Aglavros, as well as the Sanctuary of Aphrodite.
As noted by the Ministry of Culture, the lighting of the Acropolis was not limited to the aesthetic part, but includes the significant upgrade of the existing infrastructure with the modernization of the electrical installation and the automation and control system of the luminaires which highlights the whole of the Sacred Rock, the Walls, the volume and the geometry of each monument, from every possible point of view.

The marbles, whiter than ever, reflect every aspect, every geometric shape, every natural material, emphasizing the relief of the decoration of each monument.

We are thrilled to announce Mitsis Laguna Resort & Spa participation and its Fish à la carte Restaurant in the “2020 World Luxury Hotel and Restaurant Awards”! Vote for us until October 2!

As a premium hospitality brand, we aspire to go beyond what is established and expected with our impeccable facilities, capturing your hearts and minds, delighting you with the joys of premium service and attention to the smallest of details.

Sónar Athens, the Greek edition of the groundbreaking, international festival of electronic music and digital arts, based in Barcelona, returns for the second year on October 9 and 10, 2020  across 3 unique venues in the heart of downtown Athens.

READ MORE
Highlights
RELAX UNDER THE SHADE OF YOUR OWN GAZEBO

With all the services that could make your stay unique and our experienced staff that will promptly respond to every need you may have, Alila is a true resort by the sea, where you can relax and enjoy the comfort.