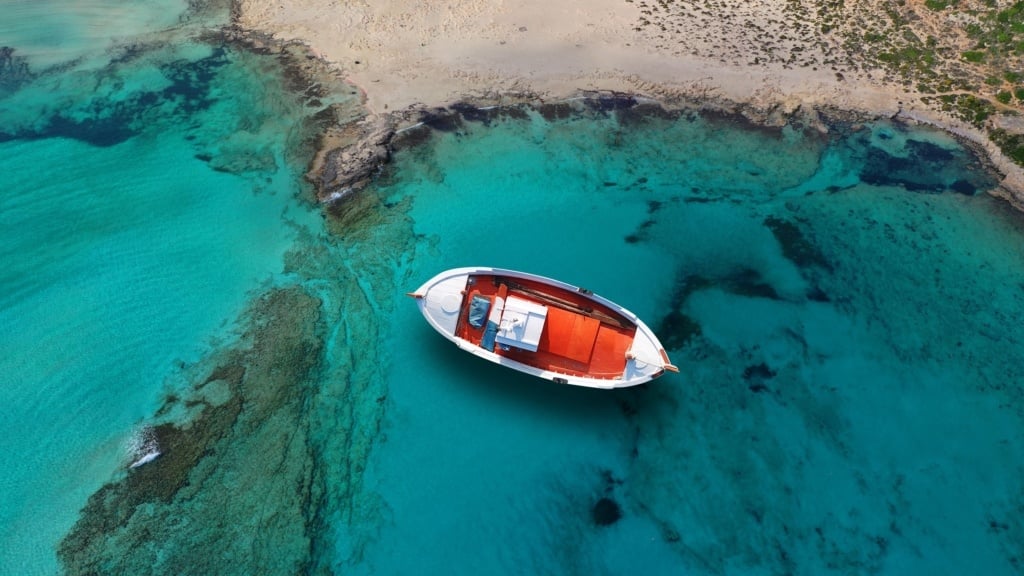 Crete is the largest island of Greece and its coastline of 1,046 m (650 miles) provides hundreds of beautiful beaches. Located between the southern side of the Aegean Sea and the northern side of the Libyan Sea, Crete gets very popular in summer due to the gorgeous beaches, the traditional lifestyle of the locals and the beautiful nature.
The island is considered to have some of the most beautiful and awarded beaches in Greece and someone can swim almost everywhere.
There is only one thing on your ‘to do’ list for Crete, and it is to cool yourself down in a wonderful beach, letting the refreshing waves take the edge of the hot spell -along with your everyday stress- away. The beach choices are vast and plenty, catering to every taste or need across the board, but at the same time making it overwhelming for visitors to choose between them.
To ease this, we present below the top 8 beaches in Crete, voted by Condé Nast!
1. Elafonisi

This is tucked away in a remote pocket of Crete’s south-western corner, so you could be forgiven for thinking you might have it all to yourself. But the lagoon beach is known to many island regulars and gets busy on a summer weekend. Its raw beauty is undeniable, with glassy aquamarine waters and swirls of pastel-pink sands kissing the shore – a natural phenomenon caused by thousands of shells washing up over the years and tingeing the white sands.

The short, winding drive down to Falassarna can be a little uninspiring with sea views blocked by greenhouses plonked across the olive groves. But when you reach this broad sweep of beach, all is vindicated. This is one of the finest beaches in Crete with plenty of room to spread your towel, superbly clear water and see-forever views. A handful of tavernas and villas to rent dot the sloping hill backing the beach. While the waves rolling off the Mediterranean may not be ideal for families, windsurfers are in their element here, and everybody appreciates the famous Falassarna sunsets when the burning orange slowly melts into that incredible sea.

Also known as Palm Beach, dazzling Preveli is one of Crete’s most celebrated strands. At the mouth of the Kourtaliotiko Gorge, where the river Megalopotamos empties into the Libyan Sea, the palm-lined riverbanks have freshwater pools good for a dip. The beach is backed by rugged cliffs and punctuated by a heart-shaped boulder at the water’s edge. Access to the beach requires a knee-pounding climb down a steep path (and a real thigh-burner on the way back up) but waiting at the bottom are bone-white sands and clear waters for snorkelling.

Preveli should be visited not only for the beach but also for the nearby Preveli Monastery, a magnificent building set on a hill overlooking the Libyan Sea.
4. Balos

You may recogniZe Balos from its appearances in numerous Crete travel brochures, beckoning visitors with the promise of lily-white sands, vivid turquoise waters and a wonderfully wild and remote setting on the Gramvousa Peninsula. It’s a promise the reality lives up to. Backed by scrubby hills, the beach and its lagoon is not easy to reach, but that doesn’t put off the regulars who brave the precarious and rocky dirt-road drive to get here, or the day trippers who hop aboard a boat for a precious couple of hours. Pack yourself a picnic as there’s nowhere to buy food or drink here.

Hugging Messara Bay in southern Crete, Kommos is a beautiful wide arc of sand backed by dunes and ringed by patchy green mountains. A steep, winding road leads down to the swirling Smurf-blue waters, pearl-white sands and views of ancient Minoan settlement ruins (off limits to the public). The wind produces some decent-sized waves here so it’s not suitable for young families, though the nudists at the northern end of the beach don’t seem to mind. At the southern end of the beach there are sunbeds and umbrellas for hire and a couple of tavernas that happen to be the perfect spot for a sunset drink.

A once laid-back fishing village that was discovered by hippies back in the 1960s, the legendary Matala, not far from Kommos Beach, is no longer a best-kept secret. So it’s best visited slightly out of season. Mythology has it that this was the spot where Zeus swam ashore under the guise of a bull with the kidnapped Europa on his back. The gently rippling waters of the Messara Bay are flanked by honeycomb-like sandstone cliffs and mysterious caves.

Explore this incredible landscape before grabbing a meal at one of the restaurants overlooking the water.
7. Vaï

In the Lasithi province, Crete’s easternmost region, lies a little slice of the Caribbean. The calm, shimmering water of the beach at Vaï is backed by a large grove of swaying Cretan date palm trees. The small beach can get busy, but to escape the worst of the crowds, take the 30-minute stroll along the trail that heads to the ancient Minoan site of Itanos, where you’ll find a trio of small, secluded bay beaches.

In a hidden corner on the north-eastern side of Crete’s Akrotiri Peninsula, just a short drive from Hania, this secret cove is well worth the hair-raisingly steep and winding downhill drive to get here. It’s tiny, there is nothing else there, and your nerves might be shot after those tight hairpin turns – but there’s a reason why locals make the trip out here: one look at that narrow strip of eye-popping, near-fluorescent-blue water wedged between rising cliffs makes this a beach you won’t forget in a hurry. You can simply take in the views from the top of the hill or scramble down the rocky path to claim your patch of sand and to take a dip.

With a bicycle ride around the island’s long cycling lanes and a variety of exciting activities, there are unlimited ways to connect with nature and refresh your body!

Castles, citadels, villages, where time stands still await. There are windmills, fjords, lunar landscapes, and even islets inundated with butterflies and sea sponges.

Take a one hour cruise to the Dodecanese island of Nisyros and enter deep into the crater of the volcano where you can feel lava rumbling beneath your feet.

From the classics to mouth-watering new tastes, the vivid city of Athens has it all and we cannot wait to taste all these delicacies again when the time is right.