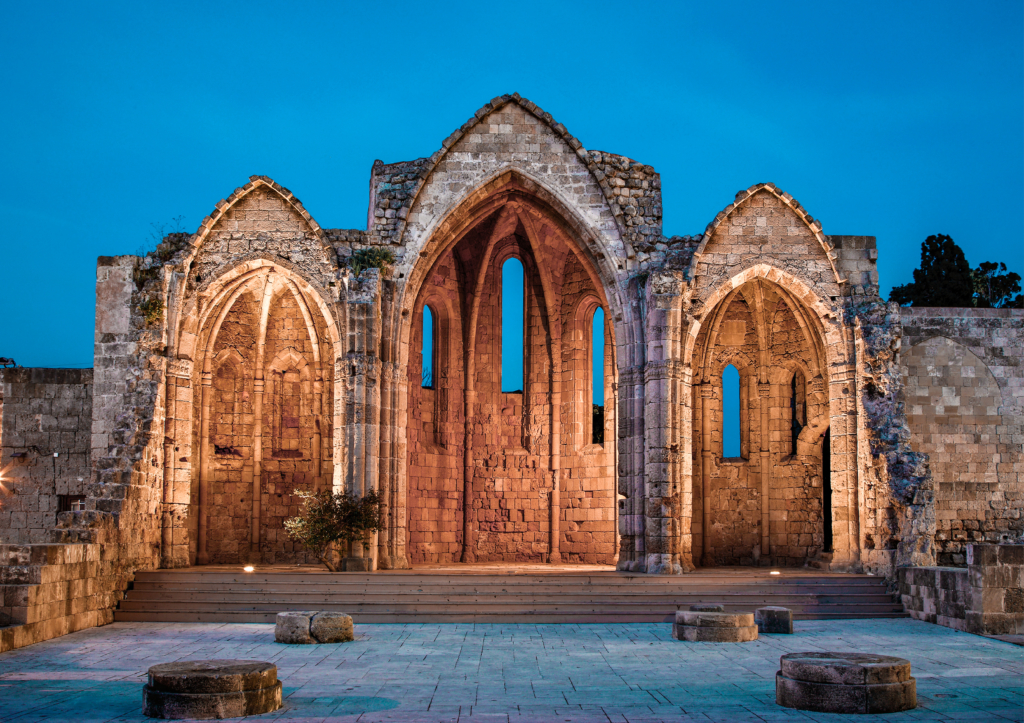 Rhodes was created by Helios, the sun god, having missed his chance to claim a part of the world, according to Greek mythology. Maybe that is why it is one of the most beautiful islands in Greece worldwide known for having impressive archaeological ruins and truly stunning beaches.
With 300 days of sunshine per year, Rhodes island is mostly famous for the romantic Old Town and the amazing beach resorts.
The most cosmopolitan and largest of the Dodecanese islands, Rhodes has always been important throughout its long history.

It holds one of the best-preserved old towns in Europe, recognised by UNESCO and considered to be one of the few remaining ‘living and breathing’ Medieval towns in the world, to get delightfully lost in. The walled city presents a unique sight, with its narrow-cobbled lanes and the Avenue of the Knights which is lined with magnificent medieval buildings, the most impressive of which is the Palace of the Grand Masters, restored, but never used, as a holiday home for Mussolini.

The city was first built in 407 BC and the 33-metre-tall Colossus, one of the Seven Wonders of the World, is thought to have straddled the entrance to its harbor.
Apart from its wealth of history Rhodes has innumerable other places of interest to visit, among which is a sea-level Aquarium in the capital, the natural reserve in Valley of the Butterflies, the impressive castle of Monolithos with its stunning views to the sea, and the ancient ruins of Ialyssos, Kamiros and the once mighty city of Lindos. All the above explains why Rhodes was among the first islands in the Mediterranean to develop tourism in the ’60s, that has through time gained a reputation as being in tune with the changing times and demands.

But the island has many more surprises for its visitors. It is an island famous for its nightlife, that presents an endless list of choices ranging from small traditional taverns to elegant restaurants serving Greek and international cuisine, along with bars to suit all tastes, discos and a luxurious seaside casino. The heart of Rhodes’ exciting night entertainment is mostly split between the Old Town and the new town but undoubtedly its crowning jewel is the youth dominated resort of Faliraki, offering everything you can possibly ask for…

TripAdvisor is one of the most popular travel websites. Each season different types of lists are being published

Eco-friendly and sustainable manners are taking over the hospitality industry all around the world. According to a study from Booking.com, 65% of global travelers seek out eco-friendly lodging.

READ MORE
Local Secrets
THE CASTLE OF MONOLITHOS IN RHODES

Monolithos is a small Greek village, southwest of Rhodes town, which took its name from the big rock, a monolith, hanging above it.

From the Northern suburbs to the heart of Athens, here are our picks of the greenest bars and restaurants worth a visit.

READ MORE
Destinations
GREEK BEACHES AMONG THE TOP IN EUROPE

On Wednesday March 14th, Greece was honored as the top destination with the best beaches in Europe, by ITE Group, the organizer of the MITT 2018.

By getting organized and planning ahead for your trip, you can get the most out of adventure travel and have the freedom to explore the world. Check out our helpful list to help you packing your suitcase!

The challenge for every new yogi is to understand that it is not enough just to attend a yoga class, but also to believe in its philosophy!

The Greek land is phenomenal in all points of view! And if heaven is a place on earth, then it hides in Greece’s breathtaking natural pools.

At the seaside Town of Fthiotida, the combination of the magnificent blue sea and the mountain forest, form a breathtaking scenery. A historical spa city with thermal springs has an exquisite natural beauty and offers a unique experience to visitors.