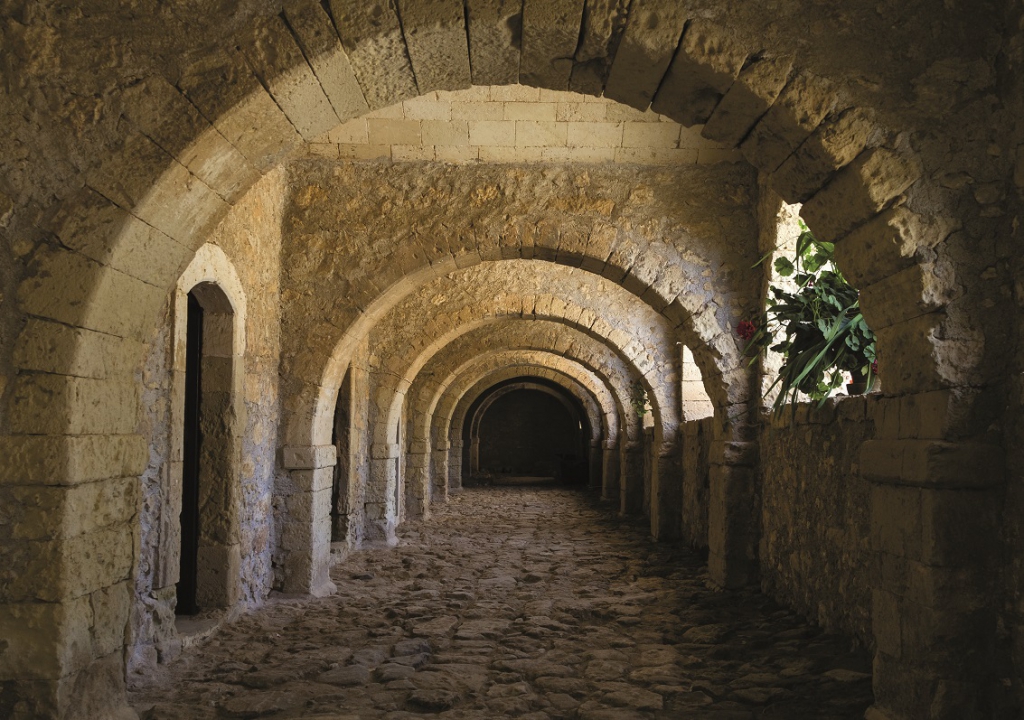 Both Arkadi Monastery, situated 23 km away from Rethymnon, and Toplou Monastery, just 10 km away from Sitia, attract tourists inspired by Crete’s rich historical past as well as Cristian pilgrims who insist on following the emotionally significant paths of Christian Orthodox faith.
Two historical monasteries which stand out in the alternative routes of the island: everything you need to know about another side of the island of Crete and the prosperous present of Arkadi and Toplou monasteries.
Monastery of Arkadi: with the aura of Cretan Revolution

Bearing a renowned historical name, Arkadi monastery, with its imposing presence, symbolizes the Cretan struggle for liberty and independence. It is one of the most globally recognized landmarks of Crete. Its wellknown bell tower and old buildings surrounding the central temple (Katholikon) are along with Knossos, Phaistos and the beaches of the island, the most photographed points of Crete. UNESCO has listed the monastery complex as a European Monument of Freedom! Arkadi is unique for many reasons: due to its unparalleled natural beauty, the glamour of its heroic history, the plethora of its deeply rooted legends, the wealth of its heirlooms and treasures. Perhaps, this is why in Arkadi the past feels more alive than the present.

Each year, Arkadi hosts visitors and pilgrims from a large variety of countries. In its court, one can listen to many languages being spoken; he or she may get in touch with a multitude of traditions, listen to different versions of history and experience a wide diversity of cultures. The monastery was founded in the 12th century by Byzantine emperor Arkadios, in the exact same location as today. It is located near the village of Amnatos, 23 km east of Rethymnon and about 60 km west of Heraklion.

It was built at an altitude of 500 m, on a fertile highland with olive groves, vineyards, pines, cypress trees and holm oaks. Many picturesque chapels surround the monastery. Close by, one can walk through the beautiful “Arkadiotiko gorge”, which is nowadays a point of reference for many naturalist organizations and trekking associations.

According to the legend, Arkadi monastery’s famous bell tower never stopped ringing throughout the centuries of Ottoman rule of the island!
According to tradition, even when the Ottomans completely conquered the island from the Venetians, they granted the monks of Arkadi monastery the special right to strike the bell whenever they wish to. The monastery is surrounded by a strong fortified wall that, in the old times, made it impregnable. As a consequence, the safety provided by the monastery’s heavy fortification attracted many rebellious Cretans who sought refuge within its walls. Many Turkish and Greek documents refer to everyday life and the adventures of the monastery: the monks of Arkadi were able to hide and protect those being wanted by the Ottoman authorities, used to provide elementary education to the populous, morally supported the region and took the lead on national affairs.

Arkadi is undoubtedly the most historic monastery of Crete and was destined to become the most sacred symbol of the Cretan struggles for freedom. It was here where the tragic holocaust of 1866 took place, a pivotal historical moment which opened the way to a series of events that led to the liberation of the island in 1898. Arkadi Monastery was the epicentre of the Cretan Revolution of 1866. The cypress trees of the monastery still bare the marks of the bullets of this fight. Ismael Pasha celebrated a victory, believing he had stemmed and contained the Cretan revolution at its birth. Yet, this was not the case. The heroic incident became known all-over Western Europe and a tide of European public opinion favoured support for the Cretan struggle for freedom. The “Cretan Question” became an issue for European diplomacy. It shifted the strategy and diplomatic tactics of the Great Powers away from the Ottoman Empire and in favour of Crete, and ultimately secured Crete’s liberation in 1898!

Toplou Monastery is located at the northeastern tip of Crete, at the base of cape Iron, 10 km east of Sitia and 6 km north of Palekastron. The monastery is one of the most historic sites in Crete and is renowned for exhibiting archaeological and historical treasures. Among the church circles it is known as the monastery of “Panagia Akrotiriani” (Holy Mary of the cape), but the locals call it “Megalo Monastiri” (Grand Monastery). It is certainly worth a visit, as you can combine it with enjoying the beautiful nearby beaches, a stroll along the site of Ancient Itanos and a visit to the beautiful nearby palm forest, in Vai. The area is one of the driest and naturally wildest in Crete, while strong winds feed one of the largest wind farms on the island. Just as the case with Vatopedi Monastery of Mount Athos, Toplou Monastery is considered to be financially “resurrected”. Both these monasteries, under the leadership of their current Abbots and thanks to their modern perceptions of management, have created small-scale economies that allow them an autonomous financial course, with proceeds rising well above their current financial needs.

The monastery was built in a square shape, like a fortress; it is surrounded by a 10 m wall that used to protect it from hostile raids.
It covers an area of 800sqm and is a three-storey building with 40 halls and an imposing, 33 m high bell tower. According to tradition, it has 100 doors, yet only 99 have been found! In the centre of the enclosure, there is a well of water that for centuries saved Toplou’s monks from thirst, during the various sieges by the Turks or pirates. Opposite the well, is the double-basilica church, dedicated to the Birth of the Virgin Mary and to John the Theologian. The entrance is on its west side, and the fort’s mighty gate door was rolled on wheels. Above the main entrance there still is a hole, named the “slayer”. Through it, the monks used to throw stones or boiling liquids to anyone trying to break the gate.

The Abbot of the Monastery, Philotheos Spanoudakis, has been active in both organizing as well as highlighting the monastery. He founded a Museum of Copper and Greek Folk Engravings made by the monks of Mount Athos in the 18th and 19th centuries. The monks’ engravings depict images of everyday life as realistically as if they were using a photographic camera. Moreover, there are rescued 15th century icons, whose value is immeasurable. During the past decades, the monastery has produced excellent organic products such as wine, olive oil and raki, all branded “Toplou”.