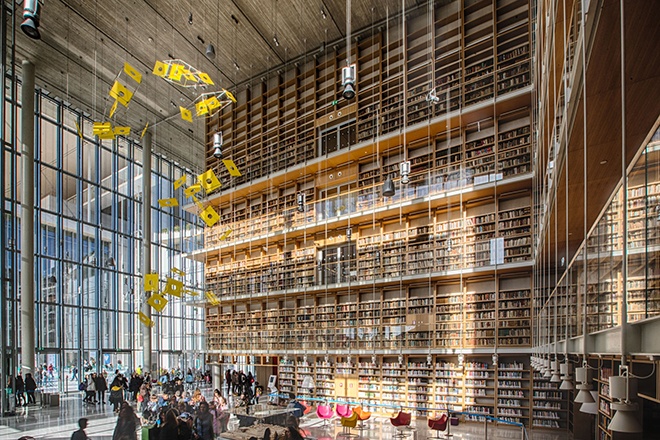 The new shiny home of the National Library of Greece was only completed last year. The Library has moved from the Vallianeio historic neoclassical building in downtown Athens to its new premises at the Stavros Niarchos Foundation Cultural Centre (SNFCC). This complex has been designed by the Italian architect Renzo Piano as a community hub for knowledge, enterprise, and innovation with the aim of re-establishing the relationship between land and sea.
In its new 22,000-square meter premises, National Library of Greece provides the Greek public with access to a wealth of Greek knowledge and literature, either directly or in digital form, or through temporary exhibitions.
The new building modernized an institution, allowing it to strengthen its research role while expanding its focus from an exclusive research facility to an all-inclusive public resource. In its enlarged role, the Library supports patrons of all ages and education — from academic researchers to children and young adults destined to become the next generation of users.
The National Library’s collection includes several original editions from the earliest days of the printing press, such as the 1476 book ‘Epitome of the Eight Parts of Speech and Other Sundry Necessities’ by Konstantinos Laskaris printed in Milan or a first edition of the Homeric epics printed in Florence in 1488 and others. There is also a large collection of hand-written codices, rare maps, engravings and other items either purchased, donated or presented under the depot legal, a law requiring that two copies of each Greek edition be given to the National Library dating back to its foundation in 1834.
Culture
STEP INTO THE SNFCC SUMMER NOSTOS FESTIVAL