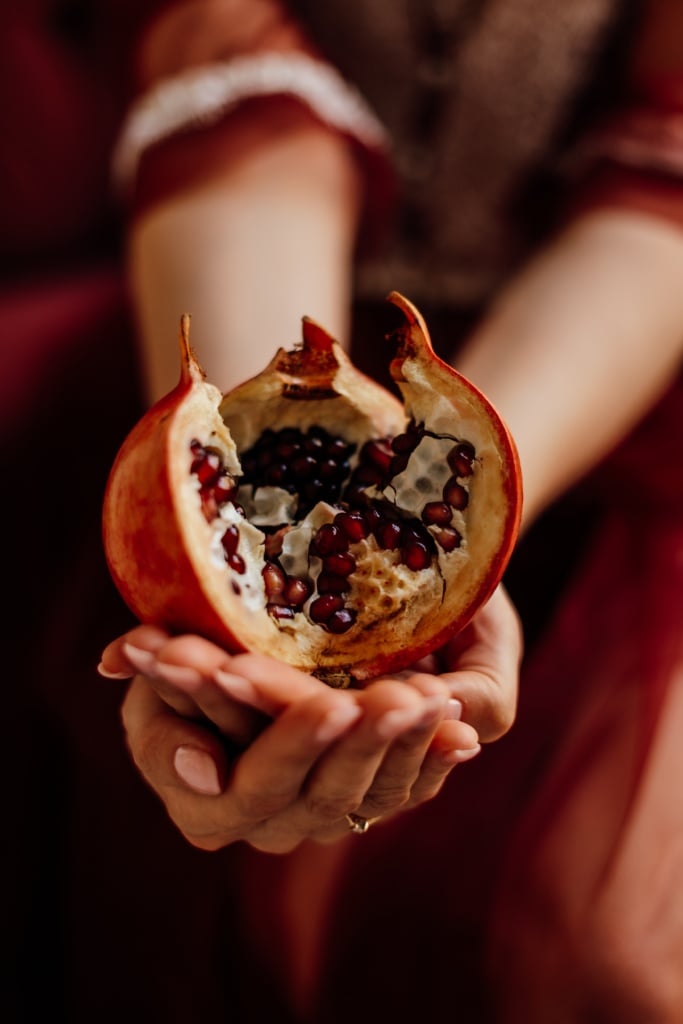 Smashing a pomegranate on New Year’s Day is an Ancient Greek custom that continues to this day as the red colored nutritious fruit is considered a symbol of life and good fortune. The pomegranate tree has been known and appreciated since the ancient times; it is mentioned in Homer’s Odyssey, as a tree grown on the island of Scheria or Phaeacia in the gardens of King Alcinous. Theophrastus, an ancient Greek philosopher and Hippocrates – known as the father of modern western medicine- refer to the pomegranate’s beneficial effects to our health.
In Greek mythology, this fruit is considered as the symbol of fertility and rebirth, and it was associated with the worship of three major goddesses: Hera, Zeus’ wife; Aphrodite, the goddess of love; and Demeter, the goddess of agriculture and nature’s rebirth.
A well-known myth associated with pomegranate is the one about the abduction of Persephone by Hades, god of the underworld. According to the myth, Hades offered this fruit to Persephone, Demeter’s daughter, in order to seal their eternal bond. The pomegranate was also used during the Eleusinian Mysteries (major ancient Greek religious festivals), as priests wore wreaths made of pomegranate tree twigs during the ceremonies. In modern times, Greek Orthodox tradition dictates that on New Year’s Eve, the family gathers outside and when the clock strikes midnight, a pomegranate is rolled and smacked on the front door of the house
The more seeds that scatter on the floor, the luckier the New Year will be.
Alternatively, this custom can occur on New Year’s Day when the family members wear their Sunday best, go to church to attend the Divine Liturgy of Basil of Caesarea, and welcome the New Year. The man of the house takes a pomegranate with him to church for the fruit to be blessed and when the family returns home, he knocks on the door so that he is the first person to enter the house in the New Year. He then smashes the pomegranate either in front of the door or against the door, and he makes a wish that the juicy, bounteous ruby-like segments of the fruit flood the home with good health and happiness — and as many joys occur as the pomegranate has arils.
Local Secrets
HONEY IS THE WORLD’S SUPER FOOD

Welcome to our guide to the great outdoors in Greece, matching your love for adventure with the passion of locals all around the country.

Gift your loved ones! Not only they are fun to make, but your friends and family will feel so touched to receive something you made with your own hands.

Dreamers and wishers belong to Crete. Dreams and wishes come true in Crete.  Are you a dreamer? Let’s explore the raw beauty of its mythic beaches.

Imagine stepping into a world of chivalry and knights, with castle walls and lamp-lit, cobblestone streets and picturesque buildings.

From the classics to mouth-watering new tastes, the vivid city of Athens has it all and we cannot wait to taste all these delicacies again when the time is right.