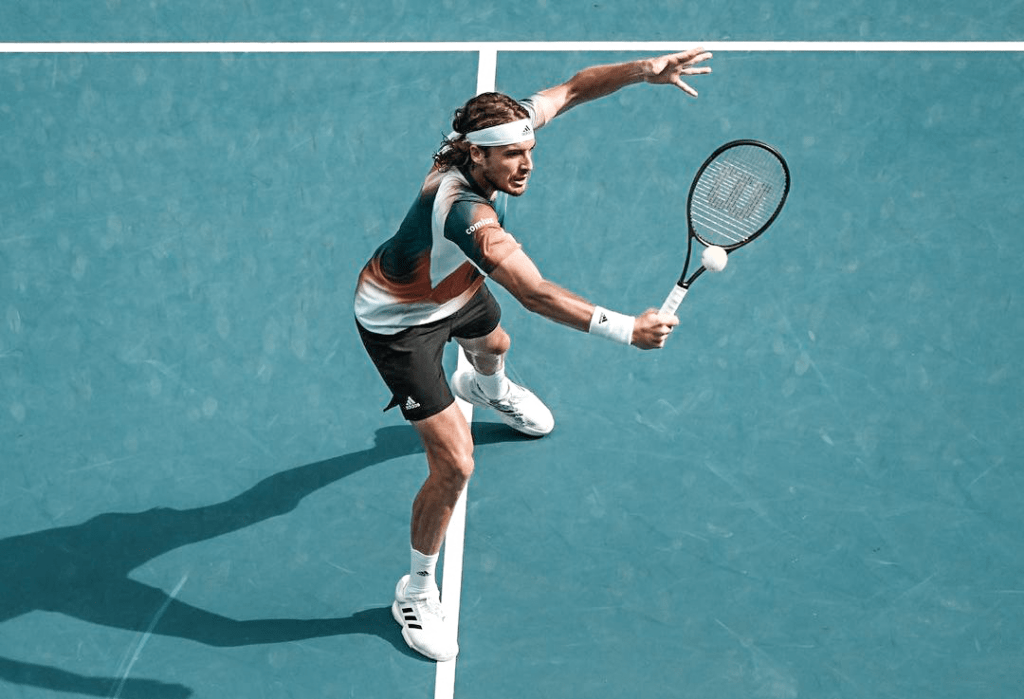 STEFANOS TSITSIPAS
ROAD TO THE TOP OF THE WORLD

ROAD TO THE TOP OF THE WORLD

Having climbed at the top of tennis global rankings, winning valuable tennis stars, collecting numerous titles and prizes, Stefanos, only 23 years old is on the top of tennis world! might be young at age but he is certainly great in talent and dedication!

Stefanos Tsitsipas was thrilled to successfully defend his Rolex Monte-Carlo Masters title this week. However, what made it “double” special was how deep he had to dig to lift the trophy in the Principality again.

“It was a great way to top it off with lots of fighting in the end,” Tsitsipas said. “It was not so much about going for clean winners or for too much beautiful tennis, but trying to put in the hard work in every single point and go over the limits, as I like to say.”

He was born in Athens, Greece on the 12th of August 1998 to a Greek father from Karditsa, Greece and a Russian mother from Moscow, Russia. These two people were the first ones to introduce him to the world of tennis. It all started at the tennis courts of a local resort in which both of my parents worked as tennis coaches for tourists and travellers. That was the place where he picked up his first tennis racket and learnt all the secrets of this wonderful sport. He is the first child out of four in the family.

Getting started with tennis

At the the age of six he started having his first tennis lessons at the Tennis Club Glifada in a group with other kids at his age. His first coach was Giorgos Spiliopoulos who taught him about the importance of the sport, discipline, work ethic and the right technique on the court. “It was a very important step for me having a humble coach like him giving me the right steps and directing me with his knowledge from the beginning of time” Tsitsipas highlights. At the age of eight, he moved to Giorgos Fountoukos, the person who developed his game, technique, and footwork as a junior player. Stefanos says “He was a big change in my tennis since then, he is a very experienced tennis coach with lots of on-court knowledge, a very conventional way of technique development and a unique cast of mind on the tennis court”. Fountoko is still his tennis coach back in Greece until now.

Tennis life, a source of inspiration and self-realisation

After getting started with the game of tennis there was a crucial decision that he had to make, a decision that was getting closer as the years went by. Tsitsipas was ready for this long journey, this battle that he had to face, the stress, the sleepless nights, the tension, the frustration, the nerves, the anxiety… He had to face an opponent, but the biggest challenge was to surpass his expectations. He was going to take his chances, and fail most of the time but, that was and still is the key to growing successfully and chasing a dream that was and is there. Titles that many people want, but only a few get.

Tennis taught him a lot of things in his life: “I have experienced things that I wouldn’t otherwise experience if I wasn’t playing the sport that I love” Tsitsipas claims.
Tennis allowed him to see new places, meet new people, and discover cultures… He was able to turn his childhood hobby into his profession. That was incredible already! Tennis has taught him discipline, self-awareness, behaviour, morality, respect, sportsmanship and decision-making.
Stefanos passionately states “Tennis represents me and everything that I have. Tennis is always going to be my job and my passion. Tennis is my life!”
People
MITSIS TRAINING STORIES

At Mitsis Hotels, our people, our hospitality heroes are at the centre of everything we do. Our people are our most valuable asset, being at the core of our DNA and operation.

Just missing out on a ranking for our Power list does not mean a woman is not powerful. There are so many women whose power is rising—and for an elite few, rising at a rate that could earn them a spot on the list as soon as next year. To that end, these are the women to watch for 2022!