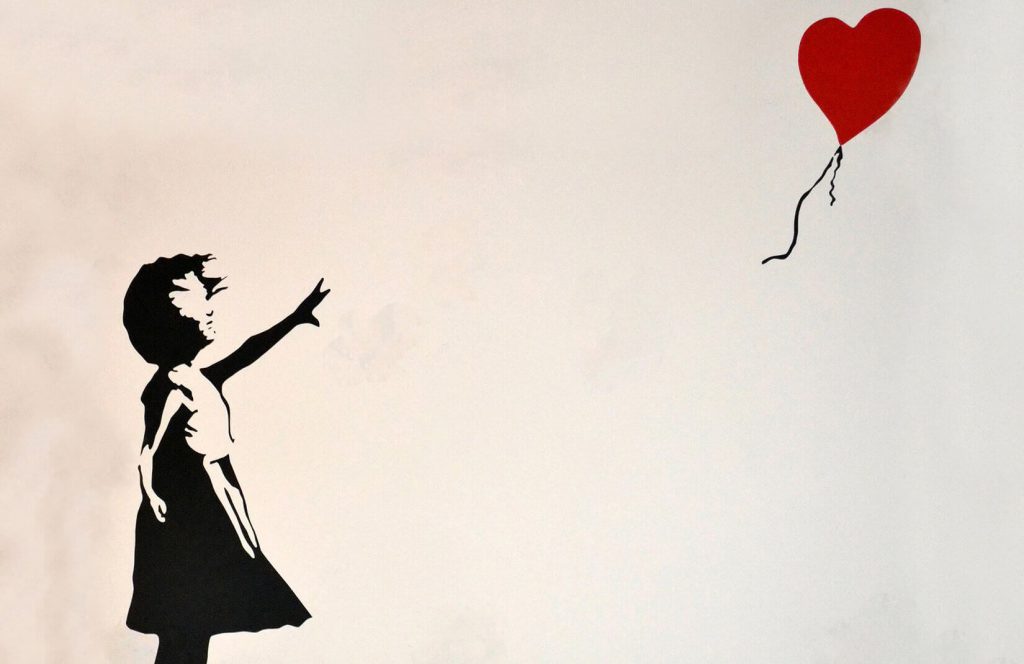 STEVE LAZARIDES
THE MAN BEHIND BANKSY

With the staged self-destruction of his own 1.4 million dollar painting at an auction, Banksy shocked the world yet again and cemented his status as one of the most fascinating and unpredictable artists of our time.

Art dealer Steve Lazarides is the man that discovered him and was the first to sell his work. Originally trained as a photographer, Lazarides came to London in 1992 and ended up working for various studios, including David Bailey, until he decided that this was not the way he wanted to work. After years of taking odd jobs, he found work with underground free magazine Sleaze Nation, and it was in 1998 he met Banksy and started photographing his work.

Having sold Banksy prints before Banksy was a household name, and before Lazarides even owned a gallery space, he notes, “I was looking after Banksy, but I was also looking after lots of other people as well.” This was a time when Lazarides had set up a screen-printing business selling prints and originals of artists including Banksy and Jamie Hewlett. “We wanted to make cheap art for the masses, that was the plan originally,” he recalls. His original business plan to sell originals and prints has been realized in his two London spaces; Rathbone Place presents the original works, and Shop at Greek Street sells artists prints.

Yet Lazarides has never been interested in running a gallery purely for his own profit. “I’m interested in investing time to nurture the career of an artist,” he explains, likening his gallery’s stable to a family, and for good reason.
In Lazarides’ eyes, they are all outsiders, a feeling half-British half-Cypriot Lazarides understands well, being “never fully part of one, nor fully part of the other,” he admits. At the same time, he has always been an outsider in the art world itself. “None of the artists I work with went down the traditionally art route, and there was never an outlet for them to show their work. They had to be highly conceptualized to be seen as art. It’s taken us a few years, but we’re getting there.”

In fact, what Lazarides did for street art in the UK is pretty much down to the fact he was first gallerist to exhibit street art, or what is becoming known today as ‘urban art’, a term he does not find easy to accept.

On the relation between graffiti and street art, he maintains there is a big gulf between the two. “Street art just evolved from graffiti, as all great art should. I like to see progression in things, otherwise it gets boring.”
It is clear Lazarides has been in a lifelong love affair with street art, likening his passion to a love of fine wines. He goes on to describe the subtle differences that distinguish graffiti from all over the world, and becomes even more enthusiastic when talking about the future. “There’s a new generation coming through taking it to a whole new level,” he enthuses, also noting how street art, unlike graffiti, is starting to work with the law.

Since our conversation with him Steve Lazarides has continued to break new ground in the art world, organising several “pop-up shows” in various locations outside of his gallery and in June of this year he organised an unsanctioned travelling Banksy show, featuring over 80 original Banksy works on loan from various art collectors.

In the wake of Banksy’s latest stunt (Performance? Art? Political statement? All of the above?) Lazarides spoke to CNN about his old colleague, still among the very few who know his real identity. He recalled that in 2006 Banksy’s pieces were still called ‘street souvenirs’ rather than art and the very same painting that now may be worth twice the original $1.4 million bid. “Part of the painting destruction is a statement on how much his paintings are going for now.” He described the stunt as completely characteristic of the anti-establishment street artist and called it “one of the finest moments in auction history”.

Major non-profitable organisations and associations operate exclusively for the promotion of social welfare and improve the life of communities all over Greece, focusing on medical assistance, food access, emergency aid, development aid and economic recovery.