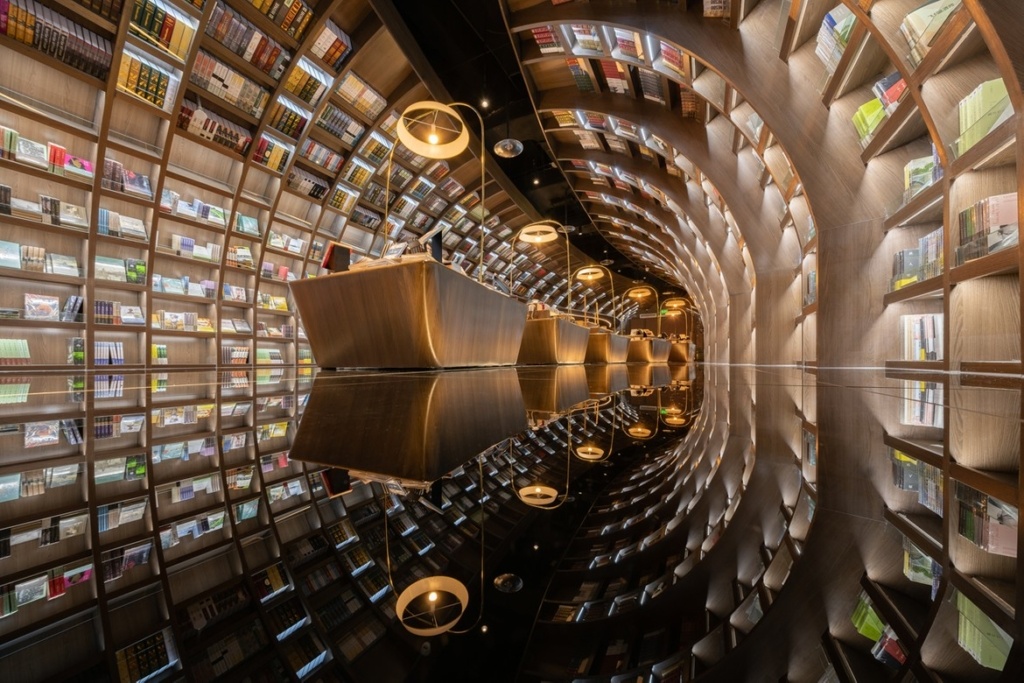 THE BREATHTAKING BOOKSTORE OF CHINA

The Chinese city of Xi’an is continuing its emergence as a center of architecture and design with the YJY Maike Centre Flagship by Japanese designer Tomoko Ikegai of IKG Inc. This bookstore has a warm, modern feel that places books and learning at the center. Ikegai wished to evoke the feeling of a gallery and a library across the nearly 50,000 square feet of space. Guests are welcomed by a massive 33-foot-tall bookcase with dramatic lighting that looks like pieces of paper floating above the open spiral staircase. Ikegai also took cues from Japanese and Chinese palaces by playing with the scale of the space and the arrangement of interconnected rooms.
Looking to create an ambiance where people, cultures, and books from around the world could mingle, a literary theme runs throughout the interior.
The overall concept for the project was “Library & Gallery.” Libraries are spaces for learning and valuing independent time, while galleries serve as intellectual spaces for displaying culture. The design blends elements of both and also incorporates features of palace architecture in order to encourage visitors and the store to collaboratively exchange and develop creative ideas. The layout resembles a Japanese or Chinese palace in its human scale and arrangement of interlinked rooms, while also evoking the universal concept of a house through its expression of the intimate connections between people, books, and the space itself.
This new 4,500-sq-m bookstore in China is a public palace!
Books play an integral role in the design of the first floor, with a 10-meter-high bookshelf just inside the entryway viscerally conveying the store’s identity the instant visitors step inside. The area around the open spiral staircase functions like a courtyard, with a bright floor and mirrors on the ceiling to distinguish it from other areas. The void above the staircase is illuminated by lights that resemble fluttering sheets of paper, while the stage at its base features an inlaid stone map of Xi’an and its surroundings, offering a gorgeous space for events.
“Libraries are spaces for learning and valuing independent time, while galleries serve as intellectual spaces for displaying culture,” IKG Inc shared.
The second floor of the YJY Maike Centre Flagship acts as a lobby for a hotel, which runs on the upper floors. In keeping with the idea of hospitality, there is also a coffee bar to encourage socializing. This level plays to the Ikegai’s gallery concept. Low ceilings, dark flooring, and display boxes set into a 165-foot-long “Book Street” all help evoke the atmosphere of a gallery while tying into the bookstore below. Specially commissioned artwork reflecting themes appropriate to the location and Xi’an’s rich history round out the experience.
Nature
UNCOVERING THE OCEAN: WORLD’S MOST BREATHTAKING AQUARIUMS