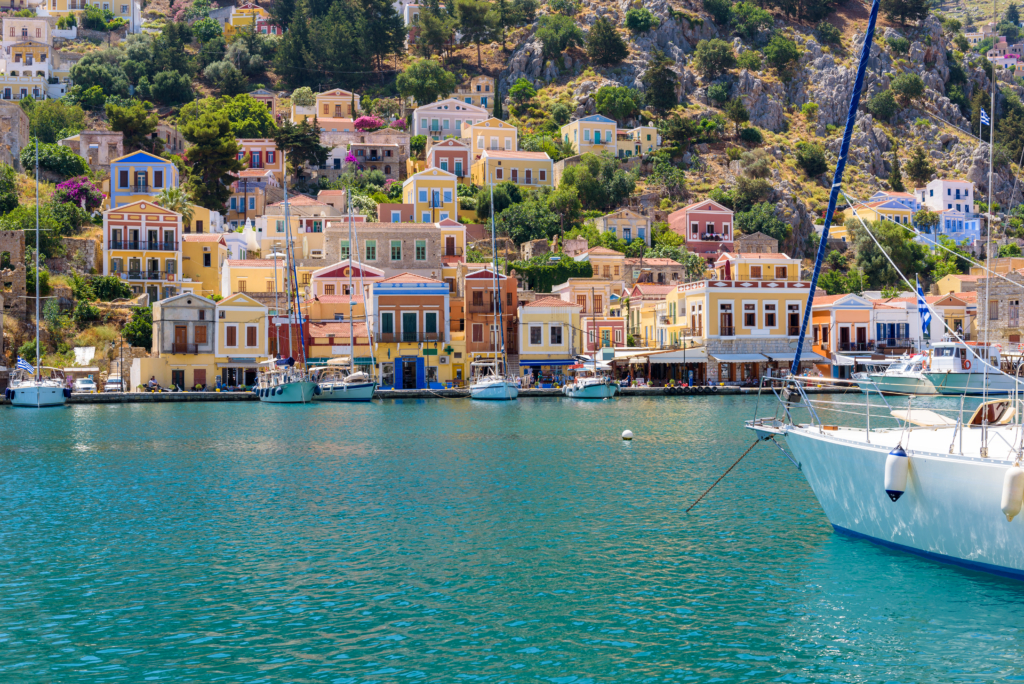 THE CHARMING BEAUTY OF SYMI

Arriving at Gialos, Symi’s main port imprints itself into your memory like a photograph. But you’ll have no idea which era the photo was taken in. There’s an old-world grandness to the multicolored mansion houses within and above the port. So much that you’re instantly transported to the days when this small Dodecanese Island was awash with the fortunes earned from shipping. Except that back then, towards the end of the 19th and beginning of the 20th century, some 25,000 people lived here and the island’s famous boatyards produced around 500 new ships a year.

These days, the fishing and sailing boats in the waterfront bob to a different, more relaxed tune. That, though, hasn’t stopped Symi retaining its authenticity and traditions. Take a look around you … at the generously laid out tavernas and those houses rising theatrically up the hillside towards the upper town. You will be gripped by the urge to explore.

Be transported to the days of colourful mansion houses and simple living on little Symi, an island with a grand past and an equally big appetite for life!
A stroll around Gialos
Before you head anywhere else, make sure to give the port the time it deserves. The clocktower and much-photographed belfry of the church of Panagia Evangelistria stand out. But mostly this is where you can best appreciate the colours and grandeur of the mansion houses rising up the hill.

Climbing Kali Strata
It’s quite a climb but tackling the 500 stone steps of Kali Strata, connecting the harbour to Ano Symi, is the best way to explore the town. Essentially one long winding staircase, takes you through the lower and upper town, allowing you to enjoy the neoclassical architecture, pebbled courtyards and tiled roofs from every angle. You’ll be stopping at the shops with local handmade products, or maybe a bakery or café along the way.

The view from the Byzantine Castle
If you can, keep climbing all the way to the Byzantine Castle above the town. It was built in the 14th century by the Knights of St John as an expansion to an existing fortification and there are even remains of an ancient citadel up here.

The highlight is the view of all the town’s roof-tiled houses and the port of Gialos.
The local cuisine
Whether you eat in the port or the upper town, you’ll love the food. There are traditional cafeterias and ouzeries for a coffee and a snack, but you should definitely try a fish taverna by the sea. Symi is legendary for its seafood, particularly the prawns. Keep an eye out for atherinopita (a seafood pie), the handmade pasta and local honey balls called akoumia.

The monastery of the Archangel Michael Panormitis
Some boat trips include a stop at the 18th century monastery in Panormo Bay, which was traditionally a pilgrimage site for seamen. It has two museums (one folklore and one religious) and is famous for its frescoes and wood carvings.

St George’s Beach
Most boat trips stop for a swim here and it’s not hard to see why. Accessible only by boat, it’s the largest and most impressive beach on the island, with a massive vertical rockface reaching a height of 300m.

Throughout Greece are organised many Christmas events, sparkling festivities, theme parks and villages to get yourself into the magical Christmas Spirit.

READ MORE
Destinations
GREECE FROM ABOVE

From the iconic skyline of the Aegean and the dazzling sunlight of the Ionian to Crete’s mythical cities and the gleam of Dodecanese’s turquoise blue waters – these are the most beautiful photos of Greece.

Don’t overthink it and wait any longer, pack just the essentials, take your loved one and go for it!

Welcome to Athens: a place where ancient monuments stand beside hipster coffee joints and bars.

On your next journey take only memories, leave only footprints with these simple travel tips.

READ MORE
Travel Tips
HOW TO RAISE A LITTLE TRAVELER

Here are our 4 top tips to pass down your travelling passion to your little one!

Greece is one of the most popular holiday destinations and many Greek places have been selected as the perfect movie sets for some of the most successful Hollywood movies.

With an incredible landscape and an incomparable history, Crete is everything you could wish for. A complete holiday love list, from coast to coast.