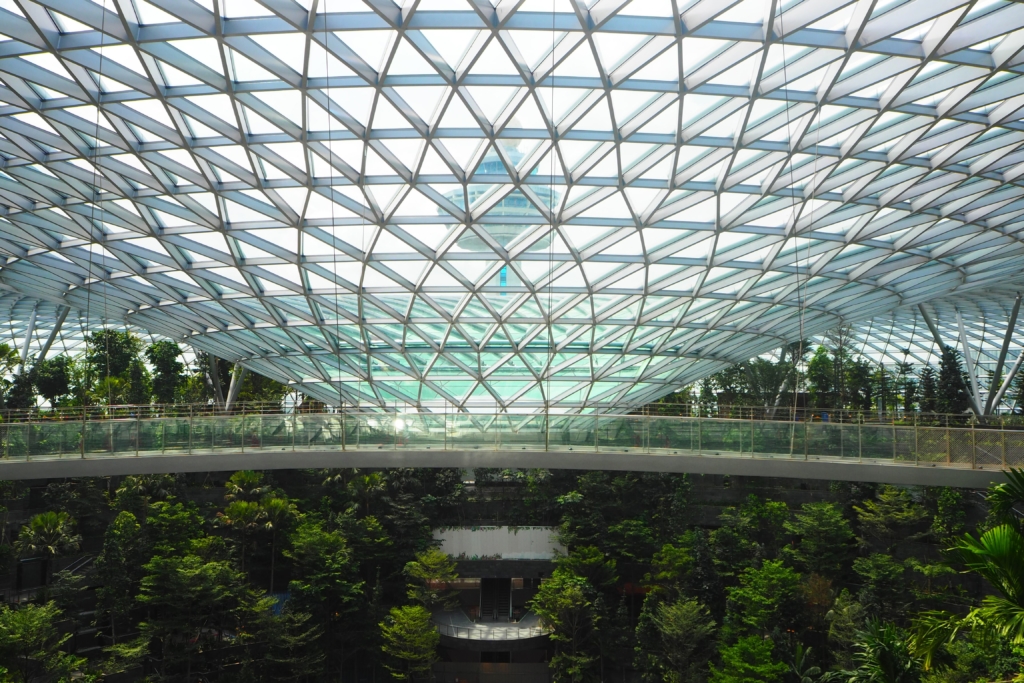 THE MOST BEAUTIFUL GREENHOUSES IN THE WORLD

Greenhouses became popular in the 19th century and to this day new greenhouses are being built as their popularity hasn’t waned a bit. There’s still something magical about entering a verdant space on a blustery, winter’s day.
Many of the first greenhouses were created to diversify or increase food supply. Now, greenhouses are still used to produce food, but others are used to grow plants for decoration, landscaping and educational purposes.
Here are ten of the most beautiful greenhouses around the world:

The Palm House is located on the site of the former Dutch Botanical Garden and was erected in 1881/2 to designs by Franz Xaver Segenschmid. One hundred and thirteen metres long, the Palm House consists of a 28-metre high central pavilion and two lateral pavilions which are three metres lower. Linked by tunnel-like passages, the pavilions contain different climatic zones: a “cold” house to the north, a temperate zone in the central pavilion and a tropical zone in the south pavilion.

Longwood Gardens consists of over 1,077 acres (4.2 km²) of gardens, woodlands, and meadows in Kennett Square, Pennsylvania, United States in the Brandywine Creek Valley. It is one of the premier botanical gardens in the United States and is open to visitors year-round to enjoy exotic plants and horticulture (both indoor and outdoor), events and performances, seasonal and themed attractions, as well as take part in educational lectures, courses, and workshops.

The opening of Jewel is hoped to entice travellers to choose Singapore as their preferred travel destination and further strengthen the position of Changi Airport as the transit hub of choice among travellers.
The design of Jewel draws inspiration from Singapore’s reputation as a “city in a garden”. Viewed from outside, Jewel looks like a giant gem. Its dome-shaped façade is made of steel and special glass materials that have the dual ability of transmitting light and reducing heat gain, which enables the growth of plants inside and provides sustainable cooling at the same time. There’s also a 16-millimetre air gap that can control the level of noise from planes taking off and landing on the runways nearby.

The Eden Project, housing the largest indoor rainforest in the world, as well as a Mediterranean biosphere, outdoor gardens and other exploratory and educations exhibitions; albeit, the main attraction is the Tropical Rainforest, housed in a biosphere measuring 180 feet high.  The Eden Project, which is located in a disused China Clay Pit, first opened to the public in May 2000, and has since become a very popular tourist attraction in Cornwall.

The one-of-a-kind greenhouse (tropical garden) within the old station premises is what makes Atocha Madrid Station in Spain so special. The 4,000 square meters (13,123 square feet) of green tropical area host 7,200 plants of 260 species from places like India, Australia, Asia o China among many others. Species are of two kinds, tropical and subtropical, and to make both happy and keep them in good health, temperature is kept between 22 and 24 Celsius degrees (71.6 to 75.2 Fahrenheit) and humidity between 60 and 70 percent.

The Enid A. Haupt Conservatory is a greenhouse in the Bronx, New York, United States, a major part of the New York Botanical Garden (NYBG). Inspiration for the park and the conservatory stemmed from Nathaniel Lord Britton and his wife Elizabeth. The couple had visited the Royal Botanic Garden at Kew on their honeymoon and thought a similar park and conservatory should be built for New York City. The NYBG and the Conservatory were the result.

Established in 1998, a place where Tokyo residents can learn about and become familiar with tropical and subtropical plants in a fun environment. It is situated on a corner of 43 hectare Yumenoshima Park, and features a domed giant greenhouse along with a video hall, and other facilities.  The dome holds about 1000 varieties of tropical and subtropical plants. Throughout the year, colourful flowers and fruit create unique scenery for the enjoyment of visitors. Boats floating at a yacht harbour can also be seen from the side of the dome.

Chicago’s Garfield Park Conservatory is one of the largest and most stunning botanical conservatories in the nation. Often referred to as “landscape art under glass,” the Conservatory showcases thousands of plant species from around the world throughout eight indoor display gardens. Year-round, visitors can enjoy the lush flora and tropical temperatures indoors, or more than 10 acres of outdoor gardens, nature play spaces for children, water lily pond, and much more.

Gardens by the Bay in Singapore, which includes Cloud Forest, Flower Dome, and Supertree Grove, is a nature park spanning 101 hectares of reclaimed land in the Central Region of Singapore, adjacent to the Marina Reservoir. Cloud Forest is a conservatory with a 35-meter tall mountain covered with lush vegetation surrounding the world’s tallest indoor waterfall. It replicates the cool moist conditions found in tropical mountain regions up to 2,000-meters above sea level. The mountain itself is an intricate structure completely clad with plants and consists of a number of levels, each with a different theme.

The Montreal Botanical Garden (French: Jardin botanique de Montréal) is a large botanical garden in Montreal, Quebec, Canada comprising 75 hectares (190 acres) of thematic gardens and greenhouses. It was designated a National Historic Site of Canada in 2008 as it is considered to be one of the most important botanical gardens in the world due to the extent of its collections and facilities.

The Royal Botanic Gardens, Kew is in Richmond on the outskirts of London, and is one of the most amazing gardens in the world. It has an extraordinary diversity of plants, over 14,000 trees and it is all set within a vast and beautiful landscape layered with history and heritage. There is always something new happening at Kew Gardens; new festivals, new events, new displays to see and enjoy.