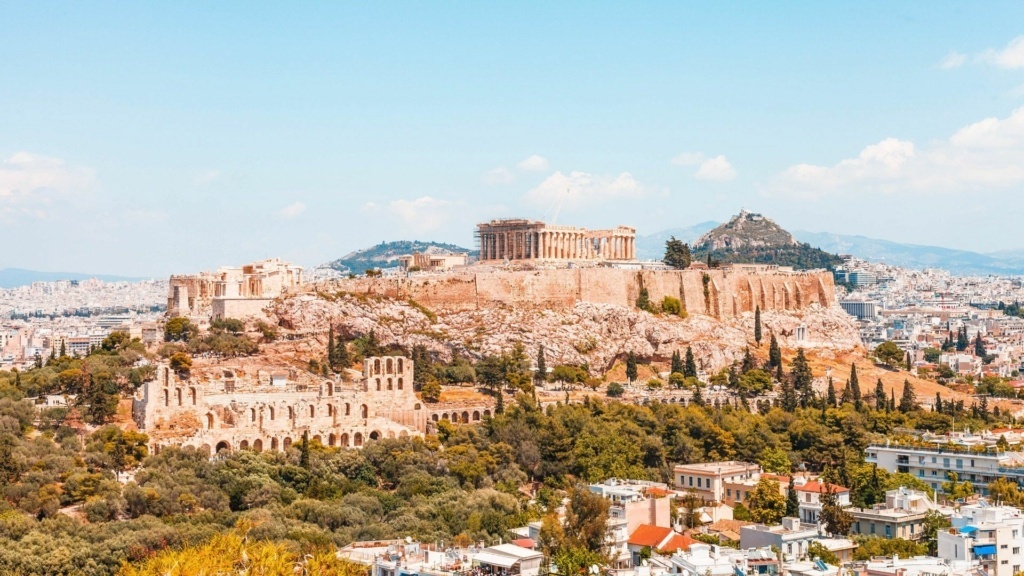 THE MUST-SEE ATHENS LANDMARKS REVEALED IN A STROLL

Athens, city of the gods, birthplace of democracy, artistic and cultural centre of the ancient world, is one of Europe’s most fascinating and complex cities, steeped in myth and legend.
If you are looking for an inspiration or food for your soul, visit Athens and let its ancient aura do the rest!
Either you want to exercise and running is too much for the summer heat or you want to explore the historical city up close and personal, an Athens walk is definitely due during your stay in the Greek capital. A walk around Athens will let you see many important ancient sites from the Classical and the Roman times.

The pedestrian street around the Acropolis
Undeniably the most scenic walk to take in central Athens is the walk along Dionysiou Areopagitou and Apostolos Pavlos streets. Surrounding the Acropolis archaeological site, these includes spectacular views over the Sacred Rock, surrounding sites, and the Acropolis museum.

On weekends, the streets under the sacred rock are filled with vendors, performers and artists and the atmosphere is festive.
Plaka
No matter how long your trip to Athens is going to be, you must include Plaka neighborhood in your waking itinerary. One of the oldest and most scenic neighborhoods of Athens, Plaka looks like it has jumped straight out of a movie. A walk around Plaka will transport you back in time, allowing you to experience the atmosphere and charm of old Athens, as it maintains the vibe it used to have almost a century ago. It is the perfect combination of old and new with its paved alleys and neoclassical buildings being interrupted by modern-day cafes and traditional taverns. Agios Nikolaos Rangavas and the stone church of Agii Anargyri are two of the famous churches of Plaka that you will meet on Prytaneion Str.
Anafiotika neighborhood
You can’t visit Plaka without visiting the legendary district of Anafiotika, one of the most local-favorite regions of Athens that has gained popularity during recent years. Anafiotika is often referred to as the hidden island within the city center due to the prominent Cycladic architecture that differentiates it from the rest of Athens.

Lycabettus Hill
If hiking doesn’t intimidate you, a walking route that is worth your time is the walk up Lycabettus Hill, one of the most romantic walks you can take in Athens and the perfect place to catch the Athenian sunset. According to Greek Mythology, Mount Lycabettus was a rock carried by Goddess Athena, who had won over Poseidon in their battle for the sovereignty of Athens and was trying to fortify the city. The rock fell from her hands after she received some bad news from a raven. Legend has it, that because of it, ravens became black.

In Athens, you will always be surrounded by history and ancient myths! Stroll in its picturesque alleys and time travel to other eras and centuries.

The National Garden
When locals want to escape the bustling city and take a deep breath of fresh air, the first thing that comes to mind is a relaxing walk around the National Graden, located right next to the Greek parliament, a few meters away from the Syntagma Metro station. The impressive selection of trees and plants from all around the world, as well as the little zoo in the middle of the garden, make it the ultimate family destination. The National Garden stretches to the south where the Zappeion mansion is located opposite the Panathenaic stadium where the first modern Olympic Games took place in 1896. Apart from its thousand of plant species, the garden has a great archaeological interest, as it still houses ancient ruins, columns, and mosaics.

Kos has been widely known as the “island of bicycles”, as it features a total of over 15 kilometres of bike lanes along its coast.

READ MORE
Destinations
GREECE IS THE MOST PREFERRED DESTINATION OF 2022