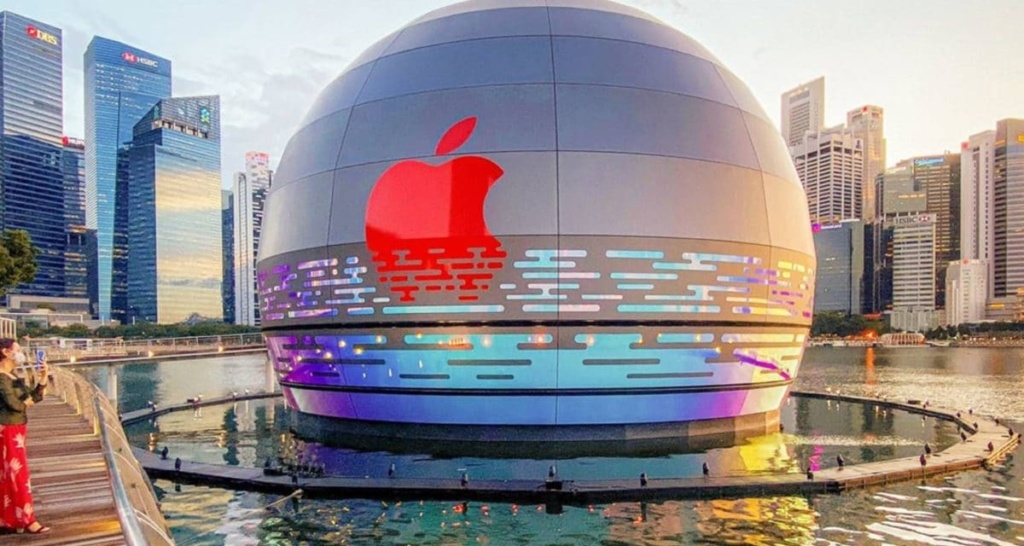 Apple’s worldwide retail network may be struggling during the coronavirus pandemic, but that hasn’t stopped the company from indulging in its penchant for pricey-looking, unique and outlandish exterior design. Drawing inspirations from a floating lantern, Apple opened in September its unique store in Singapore’s Marina Bay that sits directly on the water.
Located at Marina Bay Sands in Singapore, the space serves as the tech company's first flagship built on water.
The store is located in a luxury district of Singapore full of shops, restaurants and the Marina Bay Sands hotel and casino. The sphere is constructed from 114 individual pieces of glass held in place by 10 vertical mullions (the architectural term for supporting bars between panes of glass in a window), and Apple says the dome is a first-of-its kind construction: all-glass and fully self-supporting.

On the interior wall of the sphere there are baffles that create shade and what Apple is calling a “nighttime lighting effect.”

At the top of the sphere is an oculus that lets in sunlight, which Apple says was inspired by the Pantheon in Rome.

As well as a shop floor with all the usual gadgets on display, the dome houses a video screen and seating area to host the various talks and tutorials Apple likes to give at its stores. Underneath the dome and the surface of the bay is a lower level. Apple says this space includes the company’s “first underwater Boardroom,” where “entrepreneurs and developers interested in receiving training and advice can meet with Apple team members.”

“We couldn’t be more excited to open the breathtaking Apple Marina Bay Sands in Singapore, building on our commitment to this special place that began more than 40 years ago,” said Apple’s senior vice president of Retail + People, Deirdre O’Brien, in a press statement.

“Our passionate and talented team is ready to welcome this community to our new store and deliver the care and support that our customers around the world love.”
The most impressive thing about the new store is not physical at all, it’s something that the staff supply. According to Apple, the Marina Bay Sands’ 148-person team collectively speak 23 languages: a fact that makes the shop more welcoming to visitors than any architectural flourish.

Τhe store “include the same measures found at Singapore’s other Apple Stores” regarding ongoing COVID-19 health and safety efforts, which include limited occupancy, mask wearing and other sanitization requirements.