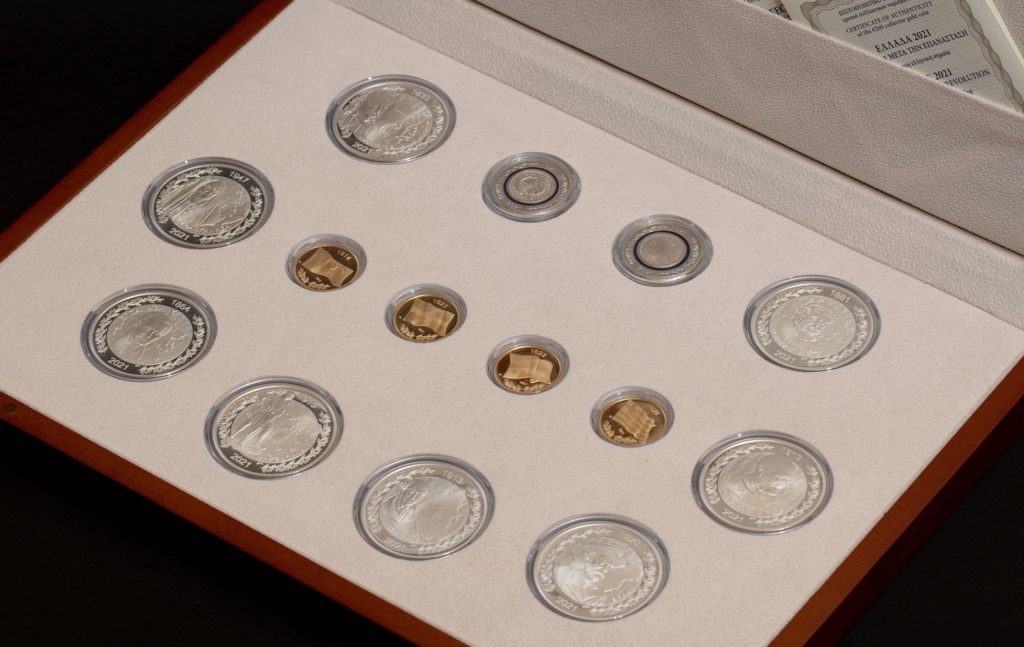 THE NUMISMATIC PROGRAM OF GREECE 2021

A unique collection for traveling through Greece’s modern history, a special souvenir of the 200 years after the Revolution, a central reference point of our landmark anniversary, a means through which Greek people worldwide can contribute to the completion of more projects aiming to honor the two centuries of modern Greek State.
This is the ``Greece 2021`` Committee's Numismatic Program.

The Numismatic Program highlights 200 years of modern history through 14 coins, in three series. The first consists of 2 metal – polymer coins imprinted with the first 2 coins of the Greek state. The second has 8 silver coins imprinted with the expansions of the Greek state through the depiction of the personalities associated with every Greek region and the third includes 4 gold coins depicting the evolution of the flag.

These 14 coins, which bear the stamp of the supreme quality and formidable technique of the award-winning engravers at the National Mint, are released in a limited number. At the same time, their molds will be destroyed after production, enhancing even more their value.

Our unique 24-hour all-inclusive programme includes a variety of theme restaurants and tastes from all around the world to please the most demanding palates, as well as cover our guests’ culinary needs throughout the day and night.

Designed to adapt to all mobile devices, the Mitsis app is a useful asset that allows you to stay informed about our offers, services, events and updates with just one click.

Greece is set for record breaking highs in the short-term rental market this summer with demand increasing across the country’s regions, according to data presented recently by AirDNA.

READ MORE
Highlights
GET SUMMER READY WITH ‘LOVE MITSIS EXCLUSIVE ITEMS
Our exclusive collection ‘LOVE’ by Mitsis Hotels was launched in 2019 and since then it has been available in our hotels and our e-shop, offering our guests the opportunity to own their summer accessories and souvenirs.
READ MORE
Menu