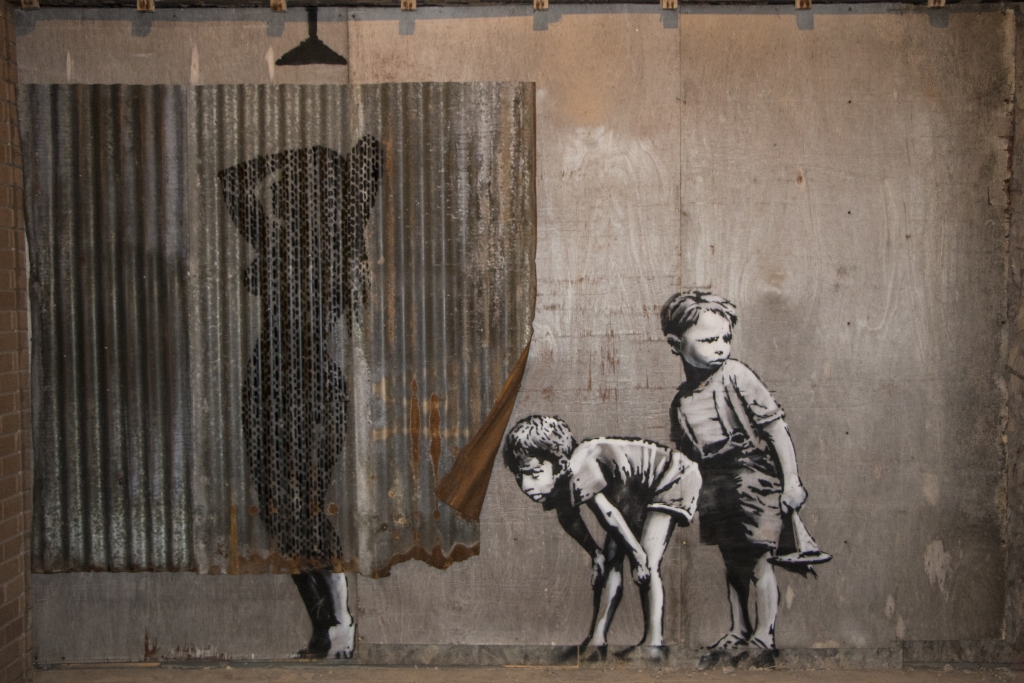 THE WORLD OF BANKSY

When Time Magazine selected the British artist Banksy – graffiti master, painter, activist, filmmaker and all-purpose provocateur – for its list of the world’s 100 most influential people in 2010, he found himself in the company of Barack Obama, Steve Jobs and Lady Gaga. He supplied a picture of himself with a paper bag over his head. Even today very little is known about Banksy himself, as he refuses to be interviewed and keeps his identity carefully maintained.
The mystery man has risen through the ranks to become one of the world's greatest street artists partly by creating an urgency to understand his character.
Street art fanatics are consistently satisfied with every piece of art he delivers, though he often leaves them wanting more. This tactic carries one’s curiosity to explore a completely new perspective or idea, leaving his artistic creations to inspire beginning and advanced artists. This inspiration is also known as the “Banksy Effect”.

The truth is that most of his fans don’t really want to know who he is and have loudly protested during the last years any attempts to unmask him. But they do want to follow his upward tra­jectory from the outlaw spraying walls in Bristol, England, during the 1990s to the artist whose work commands hundreds of thousands of dollars in the auction houses of Britain and America. Today, he has bombed cities from Vienna to San Francisco, Barcelona to Paris and Detroit. And he has moved from graffiti on gritty urban walls to paint on canvas, conceptual sculpture and even film, with the guileful documentary Exit through the Gift Shop, which was nominated for an Academy Award.

It is worth noting that on May 21, 2007 Banksy was selected to receive an award for Greatest Living Briton. Along with other artists like Shepard Fairey, Zevs, D*Face, and Ron English, he is credited with transforming graffiti from the typical “bubble writing” style of the 1980s to the “narrative-driven street art” of today.

Banksy’s reception on a universal scale also legitimized graffiti as a viable form of public art, furthering debate between vandalism as criminal activity and vandalism as an artist’s creative medium (in a way, becoming a symbol of freedom). Many of his works remain on buildings and other public spaces because of their contemporary value, even if at the time of their creation, they were seen as illegally concocted. In fact, many building owners have benefitted from becoming “owners” of an original Banksy.

From February 27 until March 29, Athens welcomes “The World Of Banksy” at Technopolis in Gazi. All profits will be donated to Amnesty International.